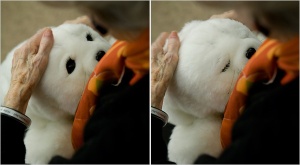 See below an excerpt from the French Radio Program

(PARO, and the Anxiety of Memory Loss) broadcasted 2/17/2016.
The group sessions recorded for the program are part of a 7 months pilot study. It took place in the locked memory care unit of the Corentin Celton, Hospital, near Paris. In the excerpt I translated below, a therapist is introducing the robot to 3 patients. I am calling the participants W1, W2, M and T. In French, dog, seal and robot are all masculine. My use of “it” to qualify robot and animals is suppressing some of the ambiguity.
W1 –“This dog is so cute! I can’t believe it. What beautiful black eyes, and that little black nose, ooh!
T –So you think it is really alive?
W1 –Me, I believe it.
T –Yes? It was introduced as a robot.
M –It feels like it is alive, that’s curious, that’s beautiful.
T –Actually it is a seal. It is a stuffed animal. You can call it a dog.
W1 –It’s a seal? Me I believe it’s a dog…Yes, yes Pappy…Me, anyway, I don’t care…Pappy? Are you forgetting us?
W2 –It’s closing its eyes.
W1 –We have to remember. Now, it’s closing its eyes…Do you mind watching a little dog?
W2 –No, I don’t mind.
W1 –Good, I was surprised.
M –You want to give it kisses.
T –Go ahead.
M –Oh no, I would not do it because…
T –It is O.K. to touch it.
M –It’s curious, Oh yes…
T –How do you find this object, here? Do you also think that it looks real?
W2 –No.
W1 –Why?
W2 –You can find it real. Me I can find that it is not real.
T –Of course.
W1 –Yes, it’s nice. Look at the pretty eyebrows.
W2 –It is not a real one…It is not a real one.
T –It is not a real one. It’s a robot.
W1 –I believe it’s a real one.
W2 –You can believe it. Yes, certain people can.
T –You do what you want.
W1 –I am starting to believe it.
T –Do you like it?
W1 –Yes, yes, yes.
T –You like it even if it is not real?
W2 –No, I don’t like it. Well, I mean, it is not a real one.
W1 –No, no, look how pretty it is.
T –But, you can still like it. It’s like a toy.
W2 –Exactly.
W1 –And the eyebrows, look at its eyebrows.
T –It does not eat, because it is not real, but it needs electricity. You plug it in to charge it, like a cell phone.
W1 –Ah, sure.
W2 (laughing) –It’s looking at you, like it was really real.
M –It feels like we could pet him like a real one. It does not know anything about anybody.
T –No, it is a robot.
M –It is completely neutral.
T –Yes, it is neutral.
M –That’s what’s curious.
T –It is a robot.”
I apologize to be writing about a product because it is a form of advertisement. I am not endorsing that very expensive product, a therapeutic robot in shape of a baby seal. I have not experienced the robot. What I like is how the producer, Irène Omélianenko, approaches the topic with a very light touch. She has edited a few sessions when PARO is presented, as a robot, to a small group of memory care patients. We also hear selected moments from post sessions report from the therapists to the scientists. All my life I have been an avid radio listener, starting with this amazing French Public Radio channel FRANCE CULTURE. I also listen to disoriented and forgetful elders 4 days a week. This is the first time a radio program has brought me the voice of disoriented elders expressing their opinion and their feelings. I was in tears.
PARO is the 8th generation of a design that has been in use in Japan and throughout Europe since 2003. It was created in 1993 in Japan, with public funding, by the professor Takanori Shibata. If you are not a French speaker you can discover PARO through:
A Soft Spot for Circuitry
http://www.parorobots.com/

Welcome to Our Site

We Are Here to Companion


ACTIVITIES TAILORED TO YOU